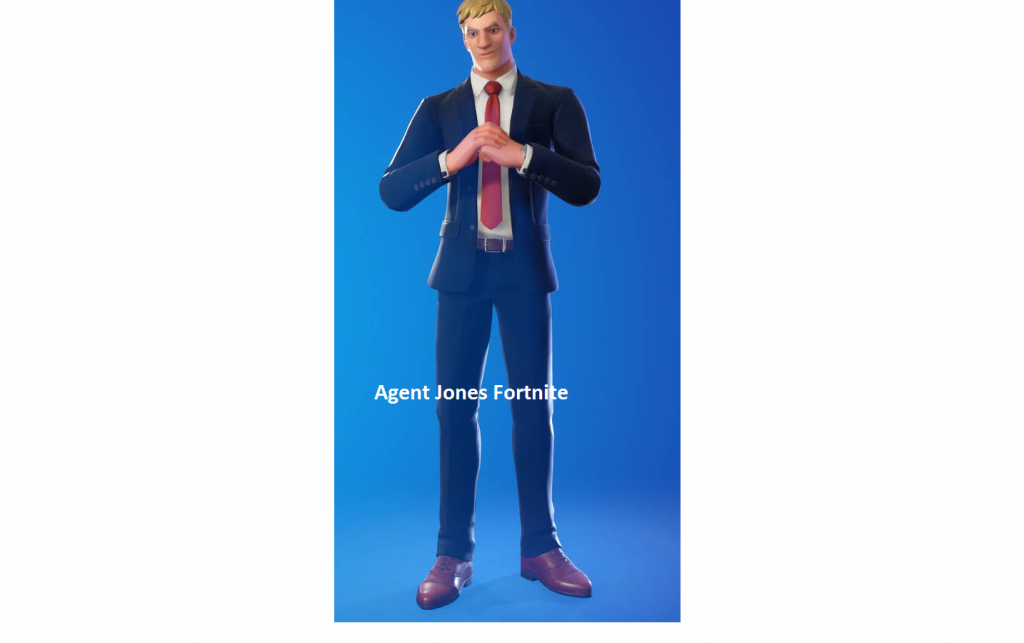 Epic Games have released the sixth season of Fortnite battle royal. One of the most mechanically-changing seasons in history is expected to occur this year. However, there is one thing that we haven’t changed much: the primary skin on which the season is focused. This time it is Agent Jones Fortnite.

Several years ago, the Agent Jones Fortnite skin leaked, and the community desired it for a long time. Following his appearance in a couple of live events in the past few seasons, Jonesy is now a character that is entwined with Fortnite’s history.

Players have been dying to have the Fortnite Agent Jones skin in their lockers since we have seen him in some exciting and mysterious backstory sequences. Now that the sixth season of Battle Royale has begun, it is finally time to bring that to fruition. Agent Jones’s skin for Fortnite features the beloved Jonesy character, voiced by Troy Baker, in a fancy slick suit that looks great on him. This classic look will appeal to players who wish to look fashionable in the sixth season.

Fortnite Agent Jones is similar to the Mandalorian skin from Season 5. The skin was at tier one in the game’s battle pass, but it was an incomplete version of the popular Star Wars character. Initially, he had a cruder outfit that could only be upgraded through quests. Players who reach Tier 100 by the end of the season will unlock the fancy look for Mando. Similarly, the Agent Jones skin can be opened at tier one, but much more if you complete the special quests.

There are six distinct Agent Jones skins in total, with the first one unlocked by default; there are five challenges associated with the Jonesy skin. To open this character’s complete set of skins in time, you’ll need to complete all the missions before the season ends. If you are interested in some spoilers about the tasks that you will be doing in the upcoming battle pass tiers as you progress throughout the season, here is a list of the complete five Fortnite Agent Jones skin style challenges:

You will find the complete list of five challenges for Agent Jonesy right here, but some things are worth mentioning. In my opinion, this author has arranged the challenges in this particular order. For you, the order may differ. As we have looked around the internet, we found that other players have the same set of missions in general so that you will have them, too, but their order might be different than ours.

Read more:How To Add Friends On Minecraft Java? All The Interesting Information You Need To Know

Each of the missions has the same general setup, so you should be able to understand how to complete them by doing any of the other challenges for the Fortnite Agent Jones skin styles. The following is a list of all the missions and some general tips for completing them.

How to unlock the Agent Jones Fortnite 15 style?

Because this is how it was for us, you might not see the missions in the same order. The first skin you can unlock is Jump 15 style, which is only available at tier 14, which is unfortunate since it could have been available at tier 15. In this one, players should investigate one of the island’s anomalies. The Lazy Lake one was ours, but you might get one of the others first. The Lazy Lake one can be found in the town itself in one of the houses.

This particular quest may have different locations within the town itself, but we cannot confirm that. Regardless, you will want to look at every house with a basement. You want to find the blue butterfly you might remember from the Zero Crisis Finale that kicked off Season 6. You will follow the butterfly down to the basement of the house, where you will complete the first part of this quest.

How many more agent jones Fortnite skins will there be in the future?

Many players will likely wonder about this since so many already exist for the skin. More skin styles haven’t been impossible to come to Fortnite in the future. In addition, Jonesy has been a prominent character in the royal battle game, basically since it started. Combining all of these factors suggests more to the story, but that may not necessarily be the case.

As for Epic Games wants to give players even more stuff to do with their characters in Season 6, I could see them unlocking some new Agent Jones styles. I would love to see this, especially if this season lasts as long as Season 5.

The different jump versions Jonesy went through when dealing with the Zero Point Crisis would also make sense with the skin theme. If there’s a Jump 15, for instance, and a Jump 88, too, perhaps there’s a Jump 80 or a Jump 50 we haven’t seen yet.

Since there are over 1200 skins available in the game, some cosmetics will likely be more favored than the rest. Certain skins have attracted the attention of gamers, while others are infamously despised. The use of collaboration skins in the game has been a community discussion topic.

What did Jones do to betray Fortnite?

The Imagined Order discovered Jones and brought him to The Bridge, where Doctor Slone tortured him for betraying them and helping the Seven. Still, he was rescued by The Foundation, which revealed itself to be the ones who lived through The Spire’s completion.

What happened to Agent Jones in Fortnite?

Eventually, he came back after the Impostors were introduced. Agent Jones dispatched a team of Impostors to disrupt operations at the Imagined Order Bridge. However, Agent Jones is nowhere in Fortnite Chapter 2, Season 8. However, there are several of his snapshots on the island as non-playable characters.