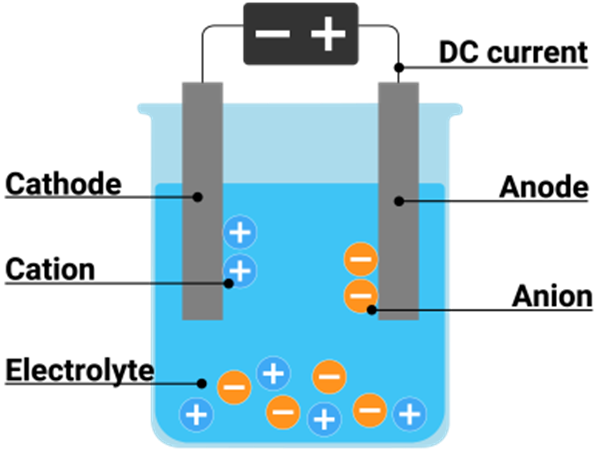 Scientists are looking for alternative energy sources as fossil fuels are becoming more expensive and scarce. Hydrogen has long been regarded as an ideal source because it does not pollute when burnt. The issue has been determining cost-effective methods of producing hydrogen.

Water is the most abundant form of hydrogen on Earth. It exists as a gas in the atmosphere in trace amounts – less than one part per million by volume. Any hydrogen that does enter the atmosphere quickly escapes the gravity of the Earth and enters outer space. There are several methods for producing hydrogen, one of which is Photo electrolysis, which generates electricity by splitting water molecules using photovoltaic cells, is one new approach being investigated.

Electrolysis is the process by which ionic substances are decomposed into simpler substances when an electric current is passed through them.

An electrolyte is a chemical substance that contains free ions and conducts electricity (e.g. an ion-conducting polymer, solution, or an ionic liquid compound). Electrolysis cannot occur if the ions are not mobile, as in most solid salts.

Production of Hydrogen by Water Electrolysis

Water electrolysis is the process of converting water (H2O) into hydrogen (H+) and hydroxide (OH–) ions by passing an electric current through it. Ions move to opposite electrodes, releasing pure hydrogen (H2) and oxygen (O2) gases. It is an oxidation-reduction reaction that does not occur spontaneously. Because the heat in the form of electricity is supplied to the electrolytic cell, the reaction is endothermic. The chemical reaction for water electrolysis can be divided into two halves that take place at the cathode and anode.

At the cathode, hydrogen ions acquire electrons and are converted into hydrogen gas in a reduction reaction. The following is a half-reaction:

An oxidation reaction occurs when water molecules transfer electrons to the anode and release oxygen gas. The half-reaction is depicted below.

Overall, the chemical reaction is

Water electrolysis can also be performed in an alkali medium. The following are the half-reactions in this case:

The water electrolysis equation is obtained by combining the two half-reactions.

Top 5 Factors to Consider When Hiring a Divorce Attorney

How much Percentage does a Personal Injury Lawyer take?

How much does an immigration solicitor cost UK?